the day the alley got paved

I have clearly underestimated the excitement of fresh asphalt as the day the alley got paved, I actually took the day off of work. It’s not that I necessarily planned it that way but it was a long road in coming and I didn’t want to miss a minute.

Paving an Alley in Boise

The process started in earnest 9 months ago. Boise has a unique situation where the roads, including alleys, are owned and maintained by the county instead of the city. Ada County Highway District (ACHD) had a program where they would pay for the materials to pave an alley if the homeowners would pay for the labor. I say “had” because I was told we were the last alley to squeak through to receive this financial assistance and as I write this, I can no longer find the program on their website.

But I think working with most government entities is a test of perseverance as a way to weed out the weak, so persevere I did.

This started with filing the appropriate paperwork which including a signature representing every house on the block that they were supportive, willing to take on their financial part and would not cut into the new asphalt for 5 years.

Next came relentless calls to contractors from the approved ACHD list. A neighbor started calling in the summer when building was booming and we were either ignored completely or were given bids that made my eyes water just to look at them.

After a winter to work out the full alley plan, I started calling again in January. Apparently after a few months off, they liked the sound of the phone ringing.

While the contractors were more responsive, ACHD was still working on government time. Contractors were reluctant to give pricing until they had ACHD’s specifications in hand and for some reason this took weeks and weeks to get and then I didn’t like what I heard. North End alleys are typically hard as rock from decades of traffic. I was hoping we’d be able to just pave over the top and call it a day. Unfortunately the detail they spec’d called for a 10.5˝ dig out with 8˝ of road mix topped with 2.5˝ of asphalt. All I could see was number signs spinning like a slot machine gone wild. I pled and begged explaining that these requirements were going to make it financially impossible for the neighbors. One weathered gentlemen, Kenny Crow, a North Ender himself, winked and said, “You just might be surprised.”

The Day the Alley Got Paved

As you might imagine, Kenny and his company, KC & Sons, was our low bid by far. I’d link to his website but he doesn’t have one. When asked how he could possibly be so much lower than the other guys he said that he owns all his own equipment and while it might be old, it gets the job done. He also doesn’t advertise, so here’s my little plug for KC & Sons, although it hardly seems like they have any problem staying busy. 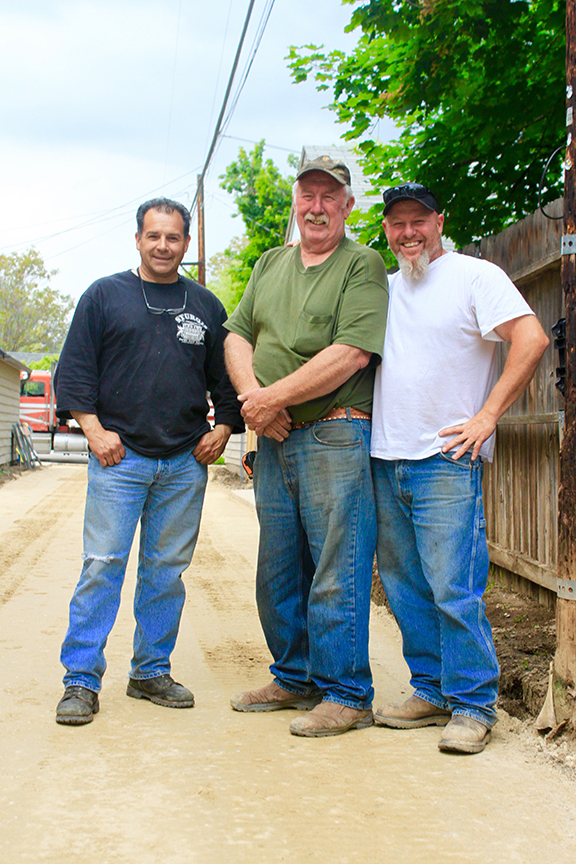 Lupe, Kenny and his son AJ

First, they did a new concrete approach on the south end of the alley as an add on per the request of ACHD. The fresh concrete was just too much temptation for me.

After several days of prep during a particularly rainy spring, May 21 finally came – hereby known as the day the alley got paved. 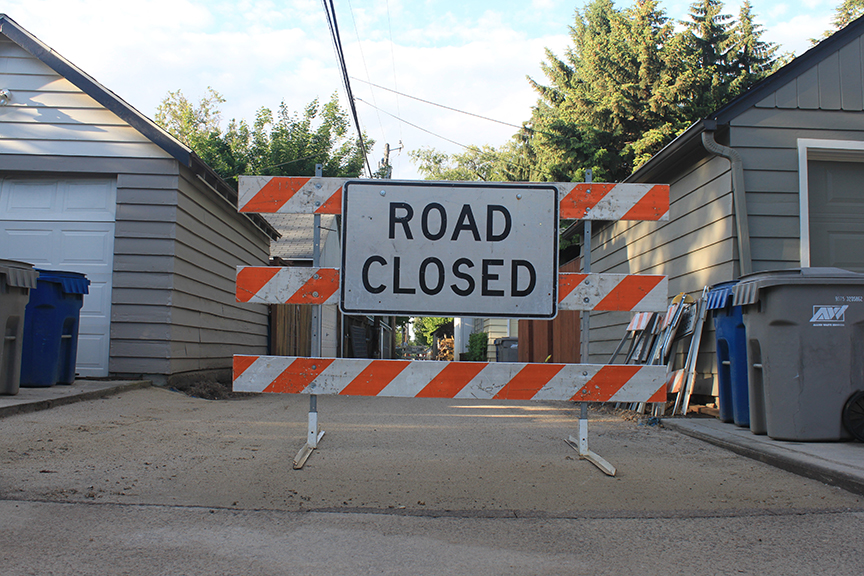 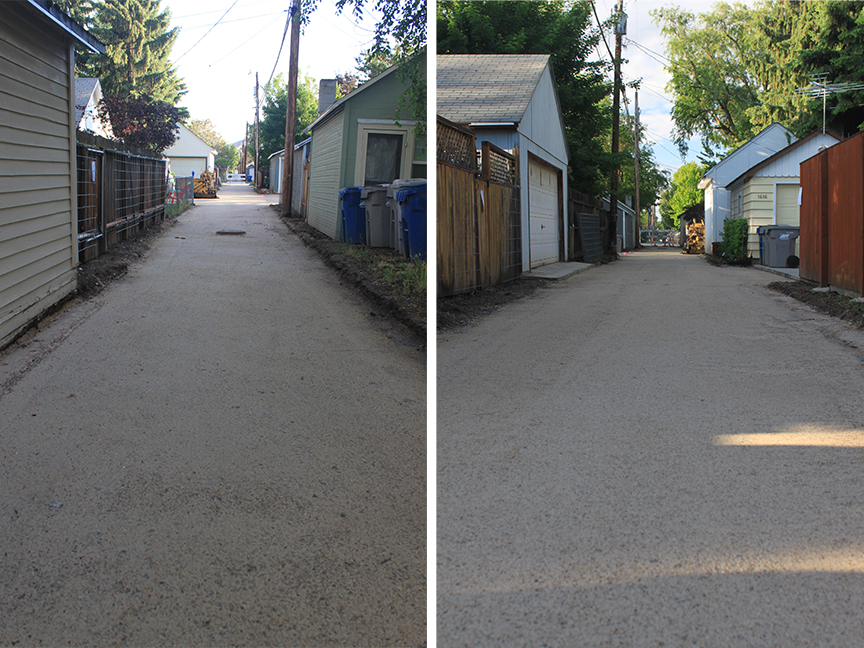 I didn’t mean to take the day off but from the minute the first truck of asphalt showed up I was mesmerized.

Do you know that asphalt is 270°F when it is laid down? I was told that my flip flops weren’t appropriate footwear. That just seemed like a little guarantee they wouldn’t hand me a rake and tell me to get busy. 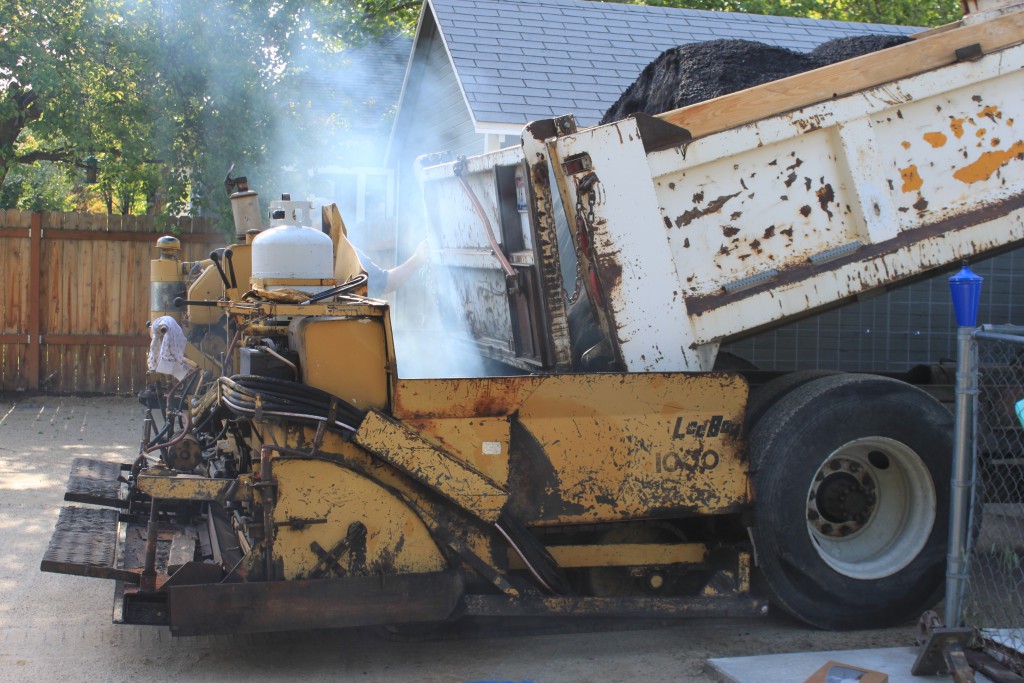 Even a big afternoon rainstorm wasn’t enough to keep them from working on through.

I went out at dusk that night with a glass of wine in hand to admire what had taken so long to accomplish and admired our beautifully paved alley. And it’s something I’ve done almost every night since. Who knew asphalt could be so exciting. 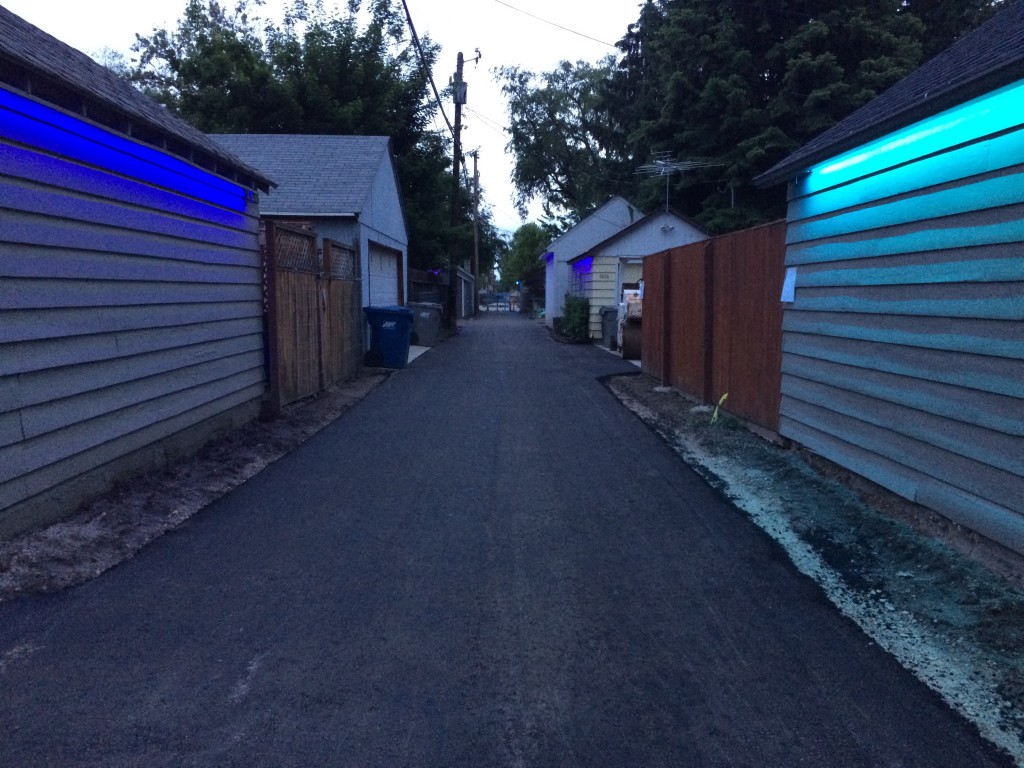