It all started about this time last year. I was just looking for a home for some blackberries and the best solution happened to be along the garage in the alley. You can read all about that fateful project here. 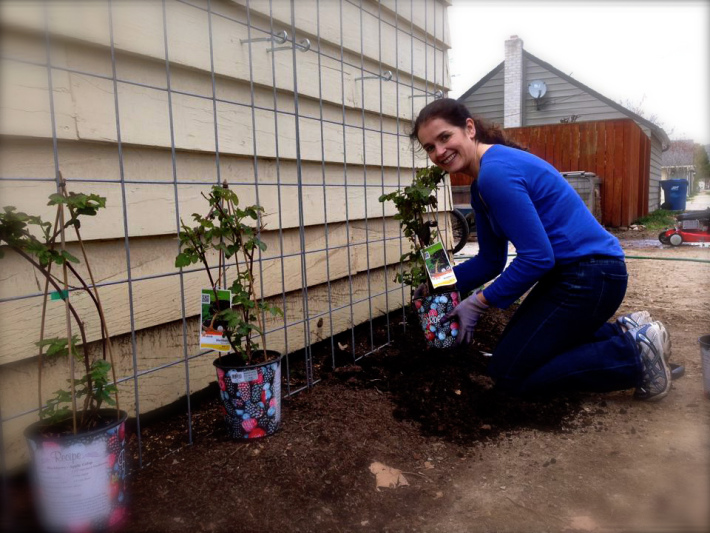 What came out of that has grown much bigger than the blackberries.

While Devin and I were spending our Saturday afternoon in the alley digging and putting up hardware, our neighbors one house down stopped by to see what we were doing. Inspired by our progress they began eyeballing the empty space they had along their garage and soon there was talk of a raspberry patch.

Later another neighbor came out to empty their garbage and a similar conversation ensued. And then I started having this vision of what it would be like if our whole alley was cleaned up and lined with a vertical edible garden.

Now my parents have learned that whenever I start a sentence with “I have this vision…” that it usually means a lot of work is going to be involved and if you know what’s good for you, to turn and walk briskly the other direction. Luckily my husband hasn’t learned this yet.

The first step was to create a to-scale drawing of the alley. I pulled up Google Earth but I needed this map to be as accurate as possible since so the only way I knew to do that was to get out a tape measure and head back to the alley. Let’s just say I have a new respect for map makers.

I had high hopes of finding landscape design software that I could use that would hopefully be free and that would take my page of measurements and make it look like my vision. Apparently that was asking too much. So while the map that I created in Adobe Illustrator sure isn’t the illustrative version I had hoped for, it does the job. Color coding makes it easy to identify spaces at a glance, building in the necessaries such as telephone poles, garbage and recycling bins and, of course, garden space.

Our alley is currently dirt and prone to big potholes that reek havoc when I am riding my bike home at night after it’s dark. More than once I’ve unexpectedly hit one of those bad boys, sending my purse and all of its contents flying through the air and have found myself in the morning rooting through weeds looking for my lipstick.

So part of the alley beautification project vision grew to include paving the alley with the option of paving some of the adjacent driveways that are also currently dirt.

But this is all starting to sound expensive and I should probably run this by my neighbors before I get too excited. Time to put a full plan together.

Stay tuned for the next step.