back to the betty basics

My husband jokes that he doesn’t think I ever make the same thing twice and while that might be a tad of an exaggeration, it’s probably closer to the truth than not. Sure, there’s favorites that get made time and time again, but with the shelves full of cookbooks and magazines that arrive every month, there’s just so many new things to experience to get stuck in the rut of familiarity.

My friends and family are often guinea pigs for all these culinary experiments – I have no problem trying out a new recipe on company. But as Father’s Day rolled around, I tried to really think what my dad would like vs. what new culinary adventure I wanted us all to go on, and it came back to the basics. I knew my dad would like meat and potatoes, but even with those I couldn’t help myself. I had to put a bit of a spin on each, but that’s a different blog.

The dessert is where I stayed tried and true. I had to as it’s his favorite – German Chocolate Cake. Oh sure… I could have found some new version of it, with some new twist. But I knew when I told him what we were having for dessert that his taste buds would be expecting – anticipating – something very familiar and I don’t ever want to disappoint, but especially not on Father’s Day, so I reached for my Betty Crocker Cookbook. 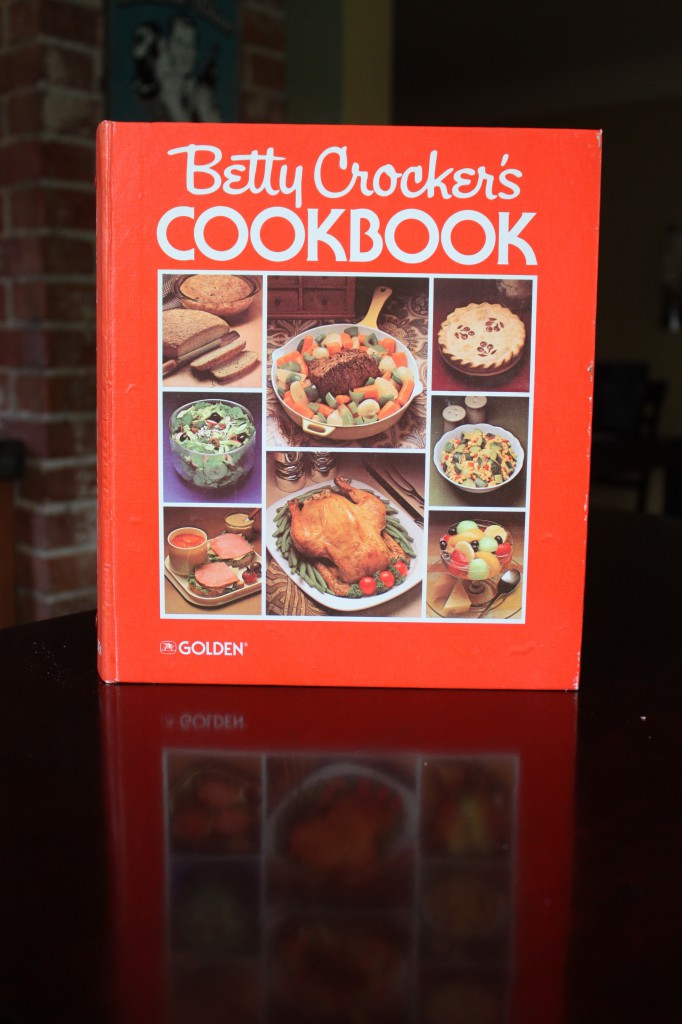 And there was the very recipe I was looking for – the one marked “Excellent” in my mom’s handwriting. 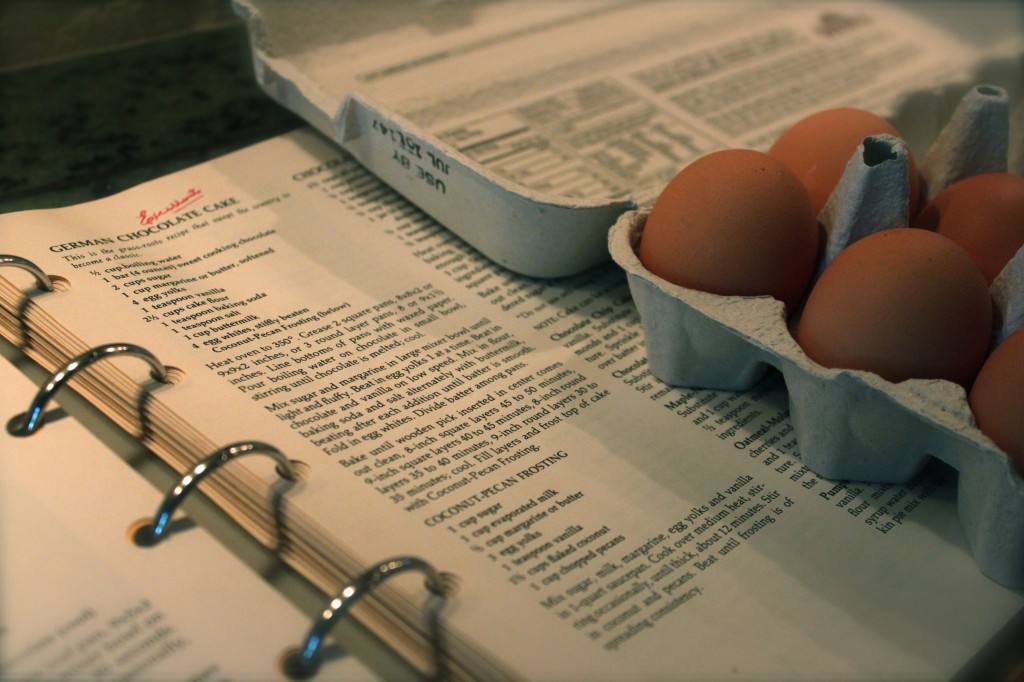 Flop note: I only had 2 cake pans, so I thought I’d be clever and divide up the rest of the batter and make 12 cupcakes. Well that turned out to be a complete flop, 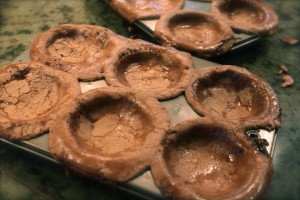 literally. Not long into the baking time, I smelt that awful smell that lets you know that something is going massively awry. I threw open the oven door to find the cupcakes spilling out all over the bottom of the oven. I still haven’t figured out quite why. Is it because it rises so much before settling back down that there just isn’t room in a cupcake tin? If you happen to know, I sure would love to hear from you. 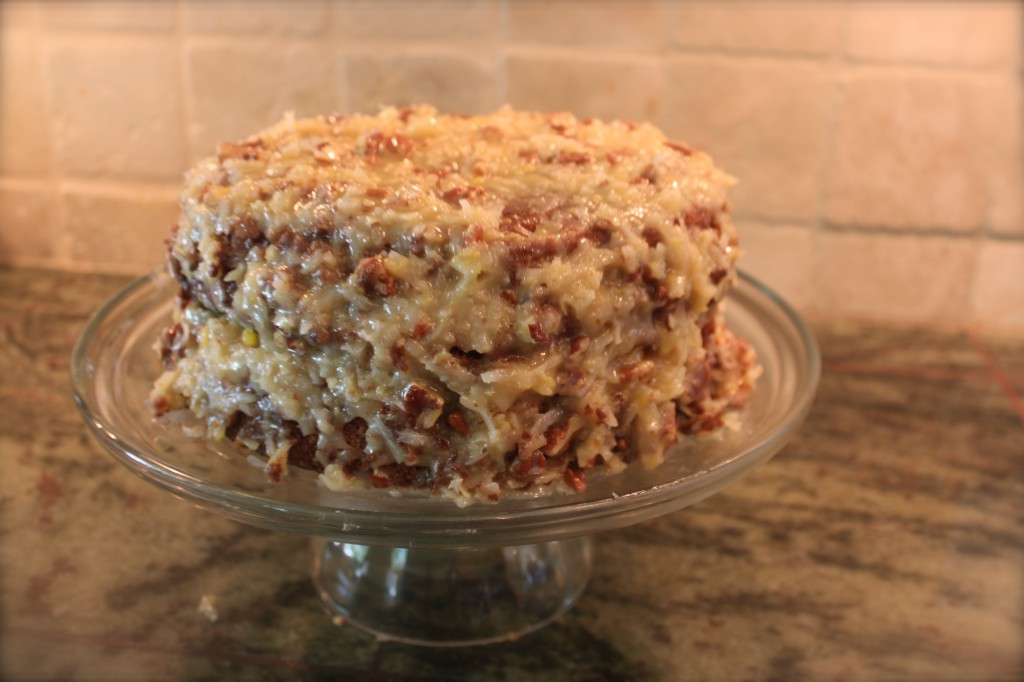 Note here too: I tried to frost the whole cake – as in, the sides too – and just when I thought I must be an awful cake froster, my mom pointed out that traditionally you’d only put frosting in between the layers an on the top of this type of cake. Well shoot… that sure would have been easier!

Every month this year I’ve been pulling down a cookbook from my collection – most often one that I have never cooked anything from. But this month, almost half way through the calendar, I ended up going the complete opposite way. To the cookbook I’ve owned the longest and undoubtedly cooked out of the most. See my mom had given me this book back in 1985 and as part of the gift, she had gone through and marked all her favorites so that when I left for college a few months later, I could have a taste of home anytime I wanted to crack the pages and make something familiar. Just as I did on this day. I have several cookbooks inscribed to me, but without a doubt this one is the most dear to my heart. Here’s to the years behind and the years ahead of most of my endeavors being edible. 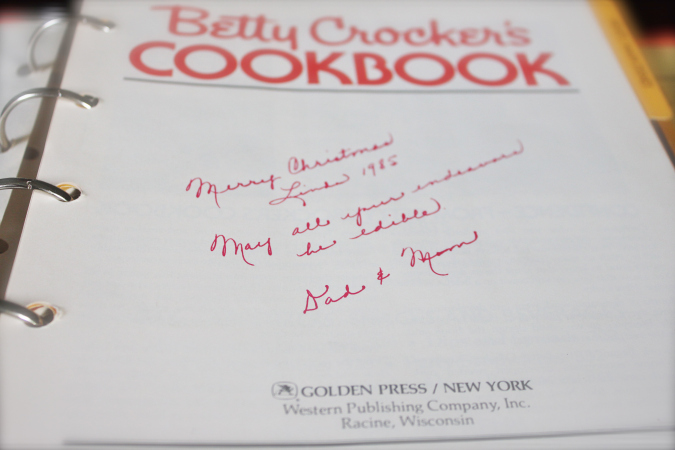