For the Edible Idaho Summer 2015 edition, I jump into the budding trend of putting wine in cans. A special thanks to Guy Hand for all the lovely photos. 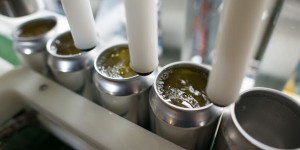 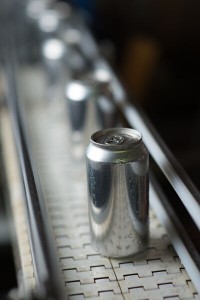 “You invest all this money and then you just sit around for a couple years with it tied up in barrels full of wine.”

Although Glavin is still committed to traditional winemaking with a line of bottled wines, this spring he decided to try something new: ditching the barrels—and the bottles—for his latest release, a canned riesling called La Boheme. It’s the first canned wine to be released in Idaho.

In March, Glavin watched as those silver cans rattled single-file down an automated production line at Sawtooth Winery (where the Riesling had been processed and aged in stainless steel tanks). As each empty can passed, a white puff of nitrogen displaced the ambient air, a rush of amber wine replaced that and a pull-tab cap dropped on top to seal the deal. 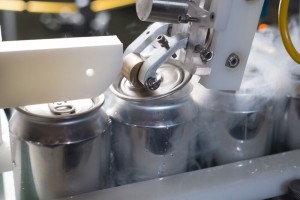 From the start, Glavin has pushed the wine envelope. In addition to releasing a barrel aged rosé, Split Rail was one of the first local wineries to keg wine and offer growler fills. But Glavin didn’t set out to be an industry trendsetter. His winemaking adventures began in 2006, when he made 10 gallons of wine in his garage. The hobby took a sharp turn in 2010, when he enrolled in a winemaking crash course at University of California Davis and then partnered with Mike Crowley, a certified oenologist and owner of Garden City’s Syringa Winery. In 2012, Split Rail was born with its first commercial release, a syrah.

Glavin has a whole list of reasons why canned wines make sense. 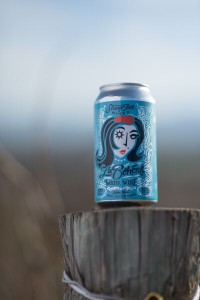 While putting wine in cans is not a common practice, it’s not new either. Australia’s Barokes Wines sold their first canned wine in 2003. They invented Vinsafe—a liner that protects the wine from the can and vice versa. Francis Ford Coppola Winery was hot on their heels in 2004, releasing Sofia—a fun sparkling number that comes in an equally fun 187 milliliter pink can complete with a sippy straw.

“We have seen rapid rise in alternative wine packaging—tetra packs, cans and pouches—over the past few years,” said Brian Golden, director of education for Hayden Beverage, the local distributor for Sofia.

But today there’s still only a handful of domestic wineries putting wines in cans: Denver, Colorado’s Infinite Monkey Theorem and Union Wine Company from outside Portland, Oregon are two of the big ones. It’s only fitting that Glavin would join that list.

“We love German-style rieslings, and this wine has residual sugar but retains a high acid content which helps to balance it,” said Glavin. “I think sometimes people have this negative perception of semi-sweet wines. Wines with some sugar content can retain a super floral nose and have more interesting flavors on the palate than dry wines. … We really encourage people to pour the wine into a wine glass the first time tasting it to get the whole perspective of the wine. There’s a lot more going on in that can than you may expect.” 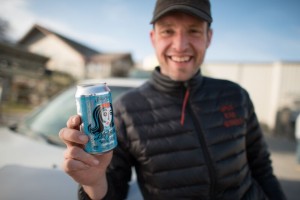 Due to alcohol laws, all wine has to be packaged in derivatives of the classic 750 milliliter bottle size. Glavin opted to go with a 375 milliliter (or 12.7 ounce) size, which meant he had to source his cans from England. This took much longer than he had expected and required a minimum order of 112,000 cans.

Glavin teamed up with Mother Road Mobile Canning out of New Mexico. Though La Boheme was the first wine the company packaged, they now have jobs lined up at several other wineries across the country. La Boheme is currently being sold for $6 a can (which is the equivalent of two generous glasses) or $24 for a four-pack at select retailers around the Valley, as well as in Split Rail’s tasting room.

“So far everyone has been stoked and super supportive about the concept,” said Glavin. “We love everyone’s willingness to think outside the box about this. It gives us hope about what we can do in the wine industry. There has always been a place for bottles and corks. Let the new generation explore new mediums, new packaging, new fermentation vessels, new marketing. We want wine to be exciting.”