Although my first visit to New York City was a whirlwind work trip, my most awesome client knew I love food and wanted to give me at least a tiny taste of what the city had to offer. To do this, she signed us up for a culinary walking tour of Chelsea. Over the course of three hours we sampled a wide range of foods, walked some of the calories off and got to know the neighborhood a bit.

I came back to Boise thinking someone should do this here. My head was already spinning with ideas of all the places the tour could go – food that could be eaten.

A couple years later my husband and I went to Seattle and to celebrate our anniversary I signed us up for a culinary walking tour of Pioneer Square. And again, over the course of three hours we had everything from wine to artisan chocolate; Dry Soda to Philadelphia cheesesteaks; coffee (it’s Seattle after all) to salami made by Mario Batali’s dad. Throw some history in there and both our minds and our stomaches were full by the end.

And once again, I thought someone needs to do this in Boise!

That someone turned out to be Angela Taylor. In the summer of 2016 she started Indulge Boise Food Tours. She currently has two tours – the Historic Downtown Boise Food & Cultural Tour and Capital City Sunday Brunch Tour with two more options scheduled for 2017.

Each Labor Day my husband and I dub the weekend “staycation”, push chores to the side and play tourist in our own town. Indulge Boise Food Tours seemed a perfect fit for this agenda.

We signed up for the Saturday tour which adds a couple stops at the Boise Farmer’s Market. Communication leading up to the tour was excellent with a reminder email a day or two before and then a text that morning when Angela had arrived at the assigned meeting spot. There were 16 of us on the tour this day – a mix of tourists and locals; mostly adults with two kids.

First stop was Waffle Me Up – a food truck that has recently turned bricks and mortar. What makes their waffles different is that they are made from a yeast-risen dough (versus batter) that contains pearlized sugar which caramelizes for a crunchy exterior with a soft, chewy inside. We tried the Bob which was topped with bacon, basil and maple syrup.

A short jaunt across the market we stopped at Mobley’s Craft Gelato. Owner Mike Mobley explained how his passion started with a Cuisinart ice cream maker and has grown into making small batch (one gallon at a time) vegan gelato, sourcing as many of his ingredients as possible locally… many from other vendors at the farmer’s market. Meanwhile, I’m diving into my sample of salted caramel gelato with chocolate covered pretzels. 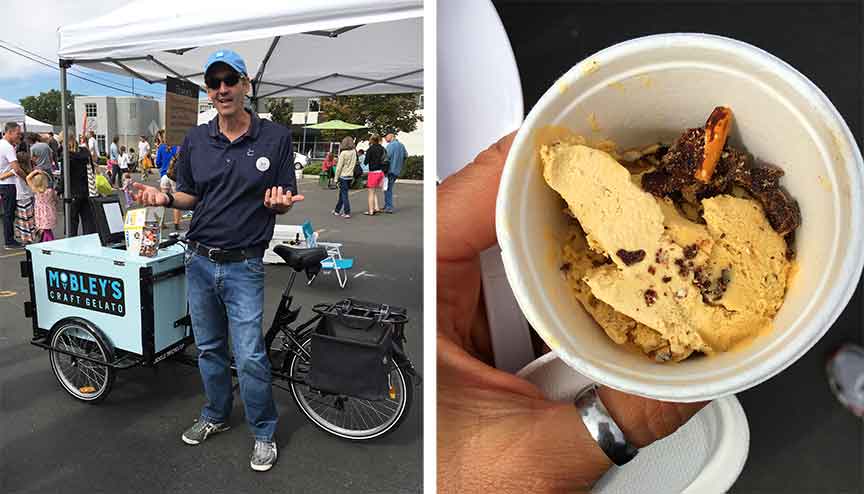 Headed into the Central Downtown area, our next stop was Olivin. Owner Joyce Renoff presented us with three olive oil and balsamic pairings to be sampled individually or combined. Bread from local Zeppole Bakery was perfect for dipping. There’s discount coupons in the guide book for all the stops along the way and I know I’m not the only one that picked up a few bottles here to take home.

Between establishments Angela fills us in about iconic Boise buildings and their history. Even as an Idaho native there was still much to learn. Like how the Idanha Hotel opened in 1901 and cost $125,000 to build which was very expensive for that time. Now the first floor is home to Guru Donuts. This donut shop, that has gained a cult-level following, started in a house in Boise’s North End and just moved into this location a couple months ago. Here we tried their signature Hipsterberry raised donut with a lavender glaze and an old fashioned.

We walk off a bit of the sugar as we head to the Old Boise Historic District to one of our local favorites, the Basque Market. We’re certainly no strangers to the delicious frozen white sangria topped with mixed berries and their selection of tapas like the ones we had today including:
• a golden, crunchy croquettas with creamy center
• a salty anchovy and olive balanced out with just a touch of heat from a pepper
• a bite of Basque chorizo 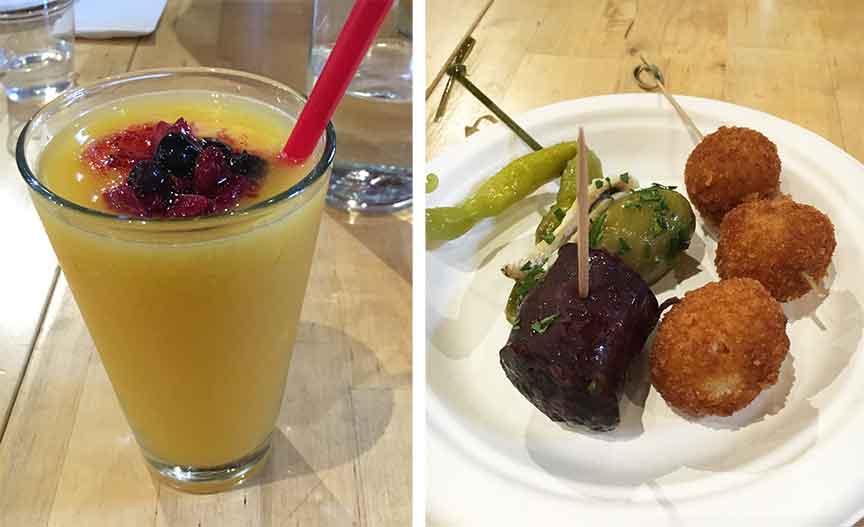 Back into Central Downtown our last savory stop was at Mai Thai where any doubt that we might still be hungry at the end of the tour was squelched. We had not one, not two, but THREE selections here – chicken lettuce wraps, swimming angel with fried tofu, broccoli and spinach and finally honey duck over bok choy. For those of us with the alcohol pairing, add their signature Mai Thai.

To end on a sweet note the last stop was the Chocolate Bar. Here we got three perfect bites:
• Autumn Harvest Bark –  white chocolate with cinnamon, dried apricots, roasted walnuts, dried organic cherries and pistachios
• Dark Chocolate Red Chili Pistachio Bark – this one had a bit of a kick that snuck up on ya
• White Chocolate Lemon Lavender Almond Bark – white chocolate with lemon oil, lavender flowers and toasted organic almonds

Now when I go to other cities and enjoy their great culinary walking tours I don’t have to wish that Boise had one too. Indulge Boise Food Tours has done a fabulous job of doing just that.

Weekend ticket price $60
Alcohol pairing $15
Get all the details, as well as tickets, at Indulge Boise.