albertsons is hatching up more fun 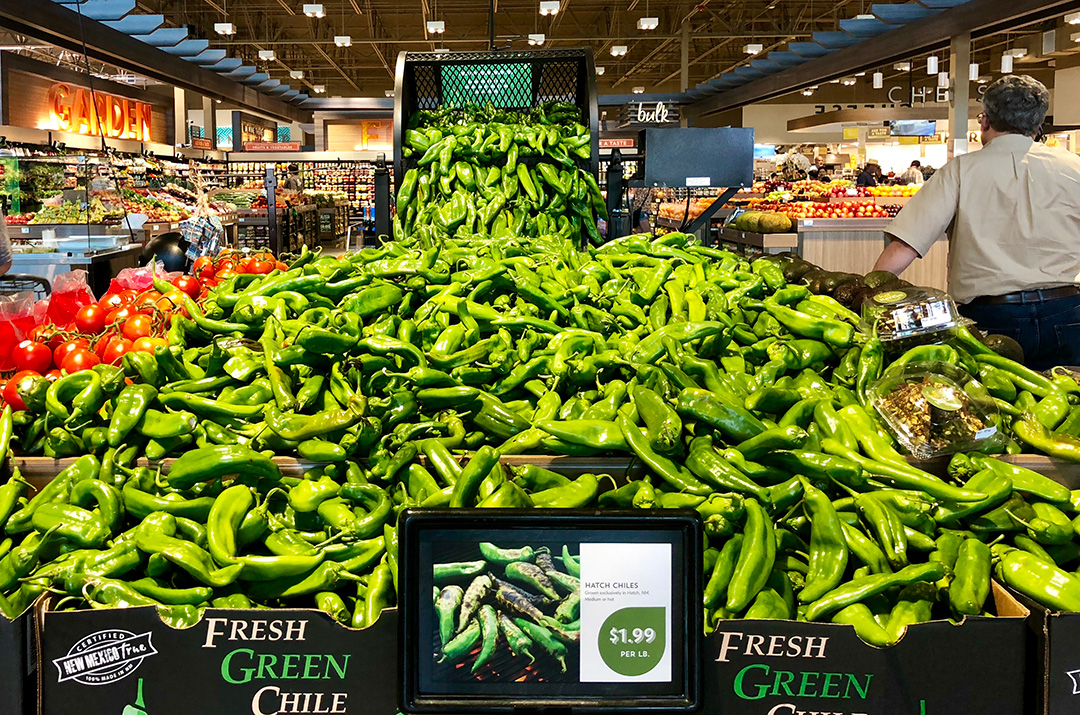 A couple weeks ago I gushed about the new Albertsons on Broadway store but they’re turning up the heat another notch. Now through Tuesday, August 14, it’s a Hatch Chile celebration!

I could smell the roasting chiles long before I could see them. With the thermometer registering 107° outside on this Boise afternoon, peppers aren’t the only things roasting. Surrounded by fans and misters, Van, who is busy pulling a load out of the roaster, tells me that his favorite way to eat them is in chicken salad or on a kielbasa. The rotating barrel hold a case, or 25 pounds, at a time and it only takes 4-5 minutes to get a batch charred and toasty. 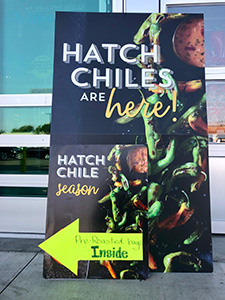 Welcome to the Hatch Chile festival! 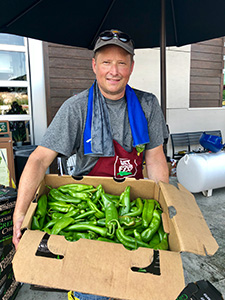 A box of fresh Hatch Chiles ready for the roaster. 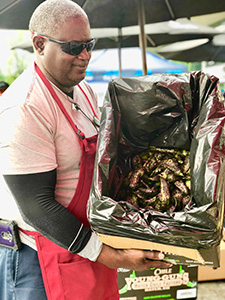 Once inside the store, I start to realize the flexibility of this nightshade which is actually considered a fruit instead of a vegetable. Behind the Hot Off the Grill counter Chris tells me about how they are doubling down on the Hatch Chile with a sausage and cheese sauce, both made in-house, that’s served on a brioche bun and then topped with crushed Flamin’ Hot Fritos and diced red onion.

Across the aisle I run into Madeline in the cheese department and ask her if she was a matchmaker what cheese would she set up on a date with a Hatch Chile. After a little consideration, she thinks that a goat cheese would be a cool companion but also suggests that the roasted peppers would also be really tasty as a topper to baked brie.

By now I’ve been sampling my way through the store, trying Hatch Chile cheese, chicken salad and cornbread. I seek out Megan at the gelato counter and inquire which selection might be the best counterpart if things start to get a little too spicy. She suggests the lemon sorbet to cool things down before I dive in for more. 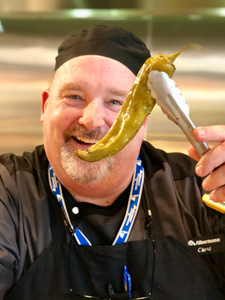 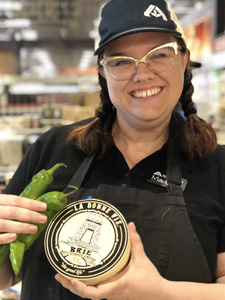 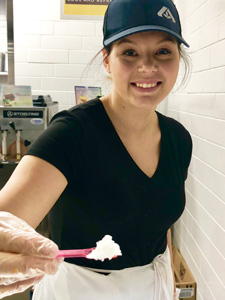 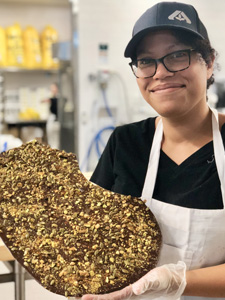 The pepper isn’t only for savory foods though. In-house chocolatier, Jen, shows me a dark chocolate bark that is made with not only the green chiles but also chili powder, and then topped with pumpkin seeds and pistachios.

In the bakery there’s even Hatch Chile donuts and a chile and cheese bread. 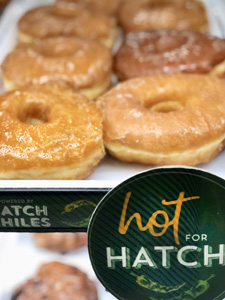 But what am I going to wash all this spiciness down with? I catch Stephen in the wine department for a recommendation. He says that Rieslings are a perfect pairing – especially German varietals like Kabinett, Spätlese – or an off-dry Gewürztraminer. Not to be left out of the game, Jonathan in the beer department suggests a pale ale, light IPA or an amber. “Think Negro Modelo,” he says. 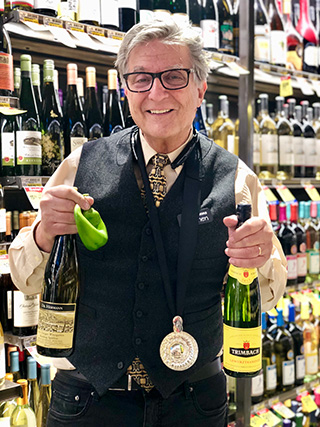 Stephen is happy to help with a wine choice. 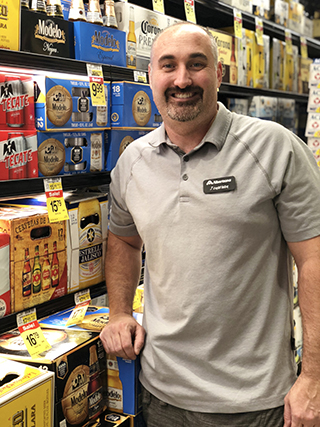 More of a beer person? Jonathan has that covered. 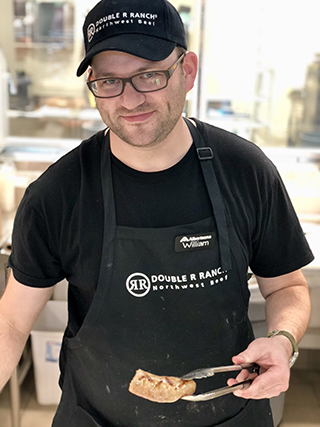 William grilling up some of the in-house made Hatch Chile sausages.

I wanted to find out more about the sausage that’s made in-house so I stop by the meat counter to inquire. “We have a guy,” says William as he stands tongs in hand. Toby is “that guy” and he makes 27 different recipes – flavors like maple blueberry, sun-dried tomato and German bratwurst – 8 or 9 of which are in the case at a time. They are made out of pork or chicken and are all natural with no nitrites. I sample a Hatch Chile sausage hot off the grill. At first I think, “I’ve got this” and then the spice starts its sneak attack. “You can really taste the flavor when there’s not additives,” William adds.

Upstairs in the bar, Broadway on the Rocks, I am introduced to Hatch Chile beer made by local brewery, Powderhaus, by peppers supplied by Albertsons. It’s only available on draft and only at the Albertsons on Broadway so grab a glass to enjoy here or get a growler to-go. I’ve sampled Hatch Chiles in a lot of forms today, but this had the strongest flavor and definitely meant business. I’m finding this green pepper to be much like Boise’s August weather – a slow burn.

If you’re worried about the toll all these peppers might take, don’t worry. Just swing by the digestive aids aisle for the antidote and then jump back in because there’s a lot of Hatch Chile fun to have and only for a limited time. 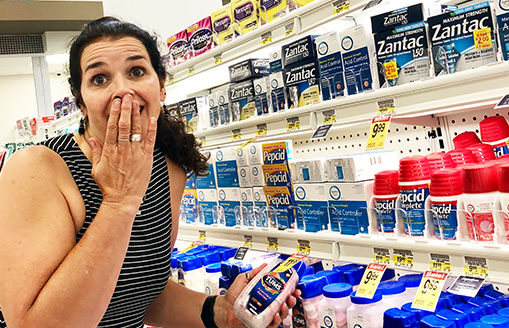 This is a sponsored conversation written by me on behalf of Albertsons on Broadway. The opinions and text are all mine.