and so then I was published

I have to admit… I have been a bit remiss on my blog postings lately but it’s certainly not because I’ve just been sitting around eating bon bons, fixating on Dancing with the Stars. No. Quite the contrary. I have a lot of irons in the fire right now with lots of wonderful things in the works – the first of which I’m excited to share with you here. Ya see, last week I got published.

Oh sure, I publish my own writings here all the time, but that is different. And I write headlines and copy and even blogs in my professional life but that’s different too. This time someone else published me and that’s what makes this really outstanding.

I think that the first time a writer is published is much like a first kiss – never to be forgotten. And so when the fall edition hit the stands on Friday I was giddy with excitement. I can’t imagine what could be better than writing about food for a magazine that highlights all the culinary experiences that my home state has to offer.

Thank you Edible Idaho for my first literary smooch.

So with that I’d like to share my first published piece with a very special thank you to Guy Hand for the most amazing photos! Here’s a link to the complete online version of the magazine.

While some friends get together to discuss the lyricism of the latest Anthony Doerr novel or perhaps get a little worked up about that new political biography, my girlfriends and I meet regularly, not over books, but over steaming pots of milk and instant read thermometers. We’ve got what I’m going to call a cheese-making club. It’s a little messier than your average book club, but there’s just as much wine involved.

Sarah Goldstein led the charge armed with her beautiful copy of Artisan Cheese Making at Home: Techniques & Recipes for Mastering World-Class Cheeses by Mary Karlin and Ed Anderson. This book will inspire anyone to want to make cheese and the way it’s structured, with the recipes progressing from easiest to harder, it’s simple to crack the cover and get started.

Kristel Grisel brings attention to detail and precision to cheese making, as to most things in her life I’m thinking, crucial to achieving success.

The most recent addition to the group is Patti Bernhardt who also happens to live across the alley. I knew that Patti was going to be a shoe in for any foodie group when I found out that she had an arsenal of enviable kitchen gear including a sous vide, pressure cooker and turbo-charged kitchen torch – all that she is generously willing to share.

For me, cheese making night started as a justification to get together with friends. That I get to learn something new while creating something delicious is just an added bonus. 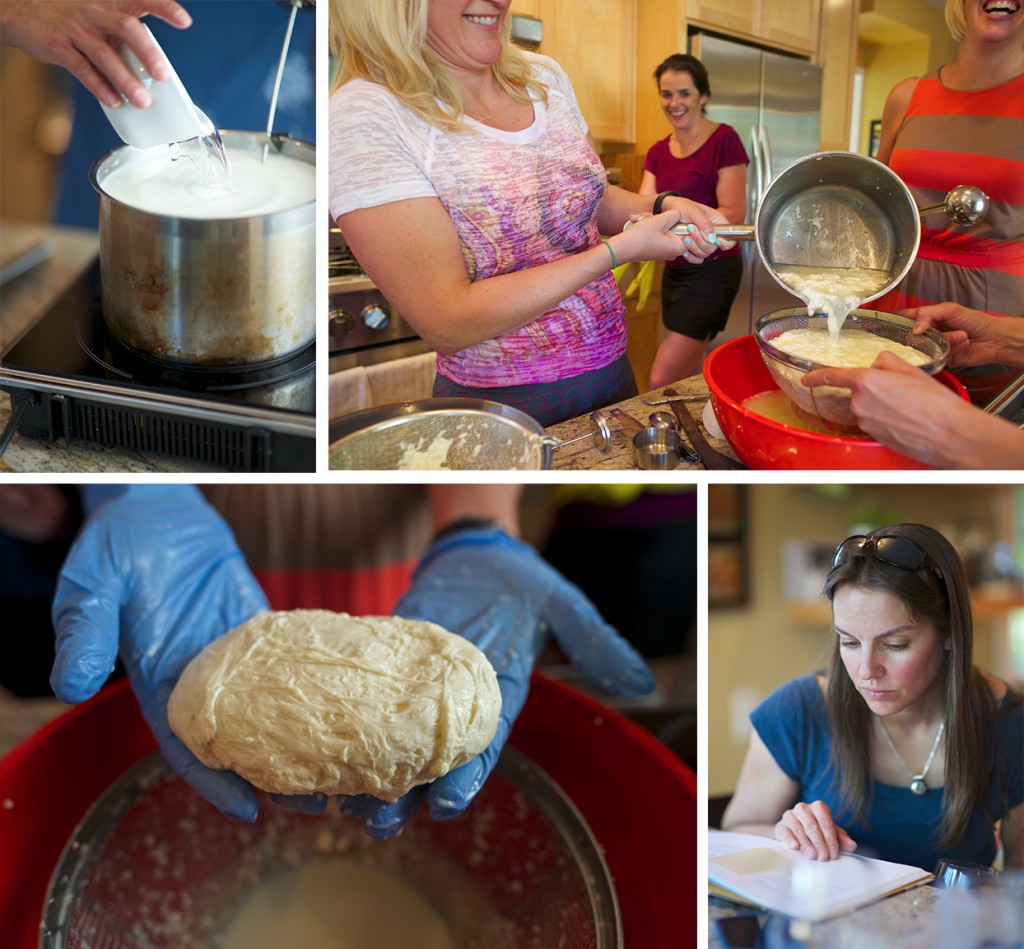 This posse of gals, amidst busy schedules involving careers and children and well, life, have for the last year and a half or so tried to carve out an evening every few weeks to delve further into the world of fromage. The thought of making cheese, with all its rennets and cultures and “mold powders,” has always seemed more like a science experiment than cooking. It was overwhelmingly intimidating, so to test the waters and build some confidence we started slow, with ricotta—or as I now call it, cheese making lite. With an ingredient list of just milk, buttermilk and salt, it was easy to understand and provided almost instant gratification.

With a success under our belts we graduated to mozzarella and found a recipe promising results in only 30 minutes. We read and reread the recipe what must have been a dozen times as things were getting a little trickier now with the addition of “science-y things” like rennet and citric acid. We huddled over the pot, anxiously watching the thermometer, waiting for the first curds to form. We put on thick rubber gloves to knead and pull the piping hot cheese like taffy. And you can bet we celebrated our success by eating every last bit of it on toasted bread that very evening.

Maybe this is where we started getting cocky because chévre—the soft spreadable goat cheese—while seemingly easy enough, seemed to elude us. At least twice we had botched batches leading to the double disappointment of not having any cheese to enjoy AND getting to watch big pots of expensive milk go down the drain. We finally mastered it though and then moved on to burrata, which we made twice because it was just that good. 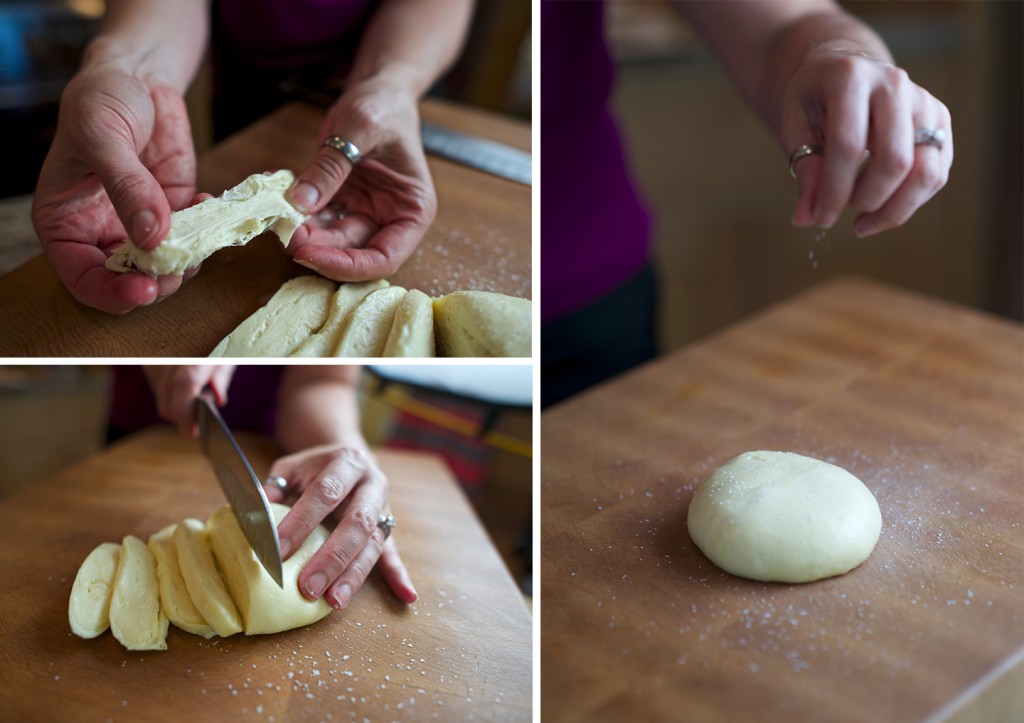 Just like a book club that has graduated from romance novels to Proust, we’ve graduated to things like mesophillic starter cultures and have begun a collection of molds (as in forms – not fungus) to make cabécou, or “little goat” in French. It’s also an experimentation in patience as there’s various steps every couple days for the first week and then aging for at least a week longer. This marinated version is easily tailored to individual tastes with our combinations ranging from preserved lemons and lavender to sun-dried tomatoes and capers, fresh basil and garlic scapes to green olives and roasted red peppers. All are soaked in olive oil which I’m guessing is going to yield a tasty bi-product to boot.

So I guess in a way this is a book club – it’s just based all around one book. Sure, we’ve been at this for more than a year and are still in the beginner section, but all that means is that there are many more tasty nights of wine, friends and experimenting ahead. 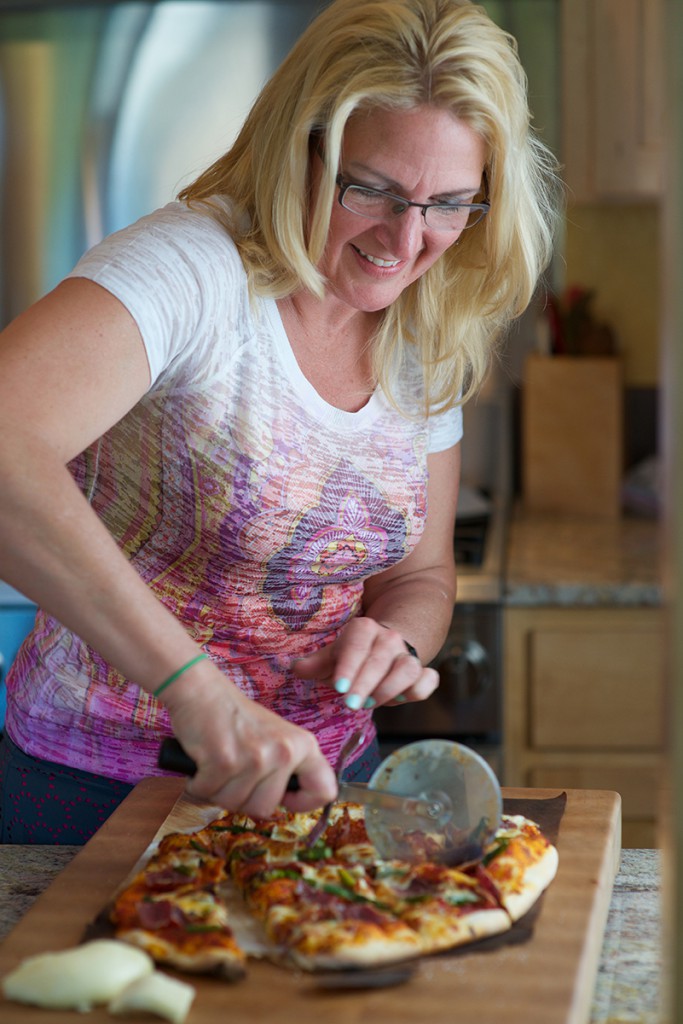