north end alley now a cool place to hang out

When the Idaho Statesman called me for an interview about the SNOW Block alley project, I was excited. And then on the morning of August 18, my phone started blowing up at 6:00 a.m. Not only was there a great article in the paper, it was on the front page! A huge thank you to Anna Webb for the article and video and to Katherine Jones for the photography. See the link on the Idaho Statesman’s site, including video, here.

It all started last summer with Linda Whittig’s desire to grow blackberries in her North End garden.

She and her husband, Devin Koski, realized the alley behind their house gets a lot of sun. They decided to build a trellis for the berries against their garage. That inspired a much larger garden-centric vision.

“We thought, wouldn’t it be cool if the whole alley were covered with trellises?” said Whittig. “And we ran with it.” 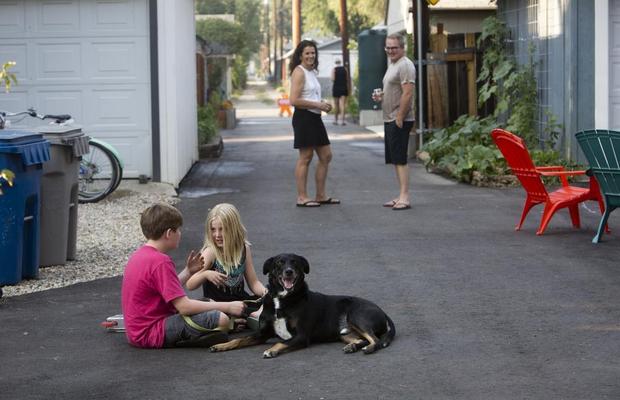 Jack Bronner, 11, his sister, Sophia, 8, and their dog, Judy, enjoy the central gathering area of the neighborhood alley. “We can hang out here, play basketball,” says Jack. “Sophia scored her first hoop on that (basketball goal).” A group of neighbors have transformed the alley into extensions of their back yards, featuring community garden/recreation area, LED lights on the garage eaves and espalied trees. Photo by Katherine Jones.

Whittig, a graphic designer and 17-year North End resident, took advantage of her professional talents to draw up a site plan and proposal for an entire alley of trellises. Whittig and Koski hosted a potluck for neighbors to pitch their idea. The neighbors liked it. Whittig created a PowerPoint and presented the idea to the North End Neighborhood Association. The organization gave the neighbors $500 for their project. That was the first of many other donations from local businesses, including Far West and D&B Supply. Others donated landscaping rock, trucks to haul plants and potting mix. The neighbors took advantage of an Ada County Highway District program to get the alley paved. The program provided materials. The neighbors split labor costs. The paving was finished in May, “and then it was a full-court press” to get ready for garden season, said Whittig. “We lived in the alley for several weekends,” she said.
Koski built most of the alley’s hardscaping, including trellises, raised beds and fences. He also installed a rain barrel to collect whatever rain falls in this sagebrush steppe landscape. “Without his craftiness the idea wouldn’t have gotten very far,” said Whittig.

In just a few months, what started as a neighborhood improvement project grew into something much larger, a vibrant public space. 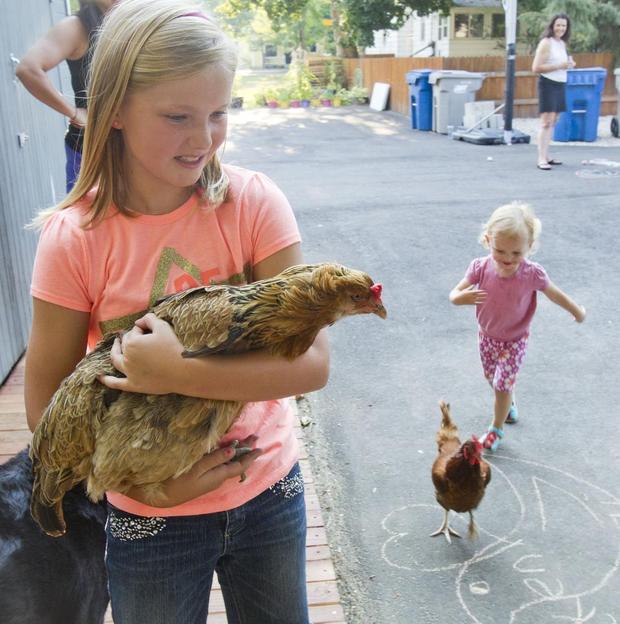 Amelia Haechred, 11, holds “Breakfast,” while Norah Perkins, 2, chases “Dinner.” The Perkinses have three tame chickens (including “Lunch”), and as part of the alley project, installed a glass window so passersby can peek into the chicken coop. Another neighbor has a pool and hosts neighborhood swims. Photo by Katherine Jones.

The alley has a name, SNOW, which stands for Slightly North of Washington. Running from Heron to Lemp between 15th and 16th Streets, the alley is just north of the Washington Elementary School playground. On a typical Saturday night, kids zip through the alley on scooters. Others camp out for a movie screening on a garage door. Dogs roam, and adults chat and sip wine. Chickens cluck in their well-appointed coop (complete with viewing window and poultry-related art). Buckets of chalk stand at the ready for anyone inspired to create sidewalk art.

SNOW has its own Facebook page. Neighbors with chickens post the availability of fresh eggs there along with pictures of garden projects in progress. Whittig writes a blog called Bistro OneSix, detailing the progress of the project and other domestic adventures. New amenities appear in the alley with regularity. Someone donated a basketball hoop for a large paved area neighbors call the plaza. Another neighbor saw a fire pit advertised online and bought it for the alley. SNOW is also a geo cache site (where people use GPS to find hidden containers usually containing a log book or other items), said Whittig. 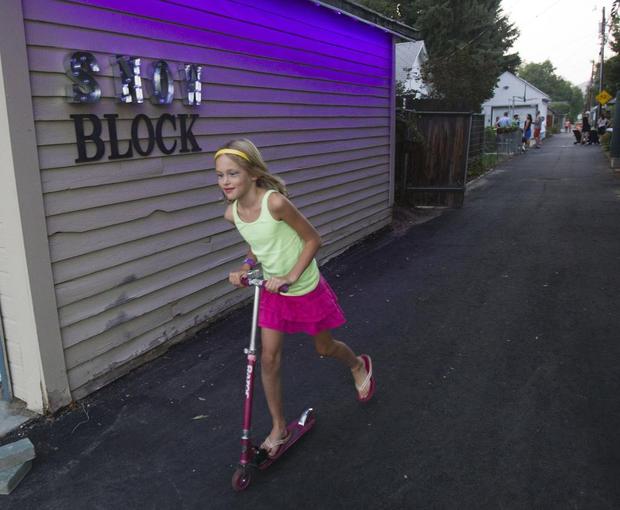 “I love my alley so much,” says Kate Bernhardt, 9. “Before all this happened, it was dirt. I couldn’t rollerblade in the alley or do anything that any kid is doing now.”  Photo by Katherine Jones.

The community spirit has spread in other ways. One SNOW family has a swimming pool. They made a special flag to hang in the alley. “If the flag is out, that means anyone is welcome to come swim. And swimming usually turns into ordering pizza,” said Whittig.

Revitalizing the alley has transformed the neighborhood, she said. “I’ve lived on this block for 17 years, and before this project, I didn’t know the names of the people who lived on the end of the block.

“This project has been great,” said Brooke Haechrel, a 14-year resident of the North End. “Everyone has stepped up. If someone needs something, a neighbor is there to help.”

Yards tend to be small in the North End. Houses are often close together. The SNOW alley has extended neighbors’ backyards, she said, and created a nice route for kids walking home from Washington Elementary.

“It’s helped our property values and personal well-being. It provides such a fluid space and everyone benefits,” said Haechrel. 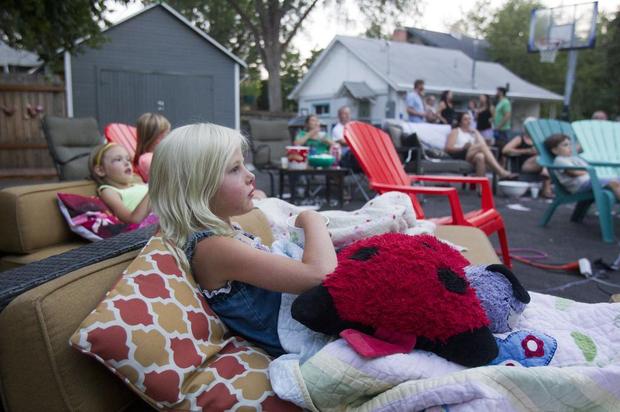 Vivian Bernhardt, 6, snuggles up for the monthly movie night (“Ice Age”) in the alley, complete with popcorn and neighborhood friends. Photo by Katherine Jones.

Patti Bernhardt has lived in the neighborhood for 4 1/2 years and is an avid SNOW participant.

“We’re meeting people we never knew before,” said Bernhardt, who credits Whittig with energizing the project. “It’s been the greatest thing. At first we thought, we’ll just take this alley and make it pretty, a place to hang out with a community garden. But it became so much more magical than that.”

She’s growing raspberries in the alley. They’re just a couple feet tall, not yet bearing fruit. In the meantime, she’s growing a pumpkin vine. The vine has become a metaphor for SNOW.

“It’s taking over the world. And we’ve barely even started,” said Bernhardt.

Whittig, Koski and the other neighbors have several projects planned for the future, including a mural, a small bike repair operation and a mini lending library.

Everyone is looking forward to Halloween and wondering how SNOW might start its own holiday traditions.

“Harrison Boulevard is such a big deal on Halloween. We were wondering if we could make a haunted alley,” said Whittig. “People started talking about Halloween in July.” 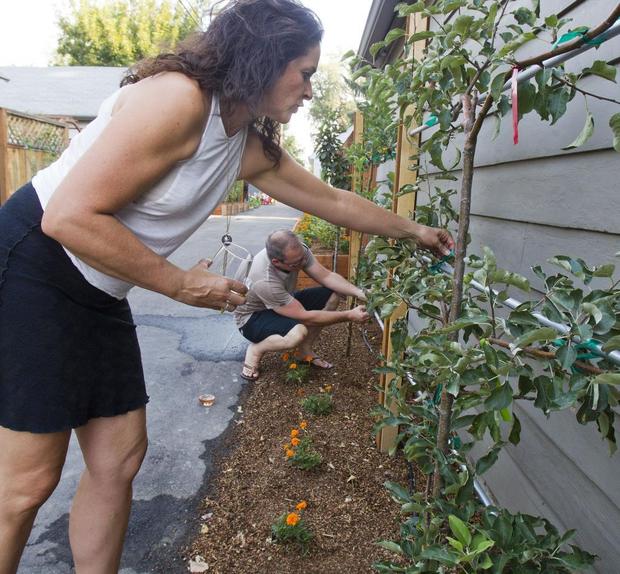 Linda Whittig and Devin Koski spearheaded the alley’s transition into a community gathering place and a vertical edible garden, including fruit trees. “We don’t have kids, we don’t have a vacation home,” says Whittig. “We have an alley.” Photo by Katherine Jones.