Thanks to Anna Webb, friend of the alley project and writer for the Idaho Statesman, the SNOW Block alley made it into the paper again. This time for a harvest/birthday party. It’s something that I’ve dreamt of since the very beginning –  long tables with white linens, twinkling white lights, and people eating, drinking and having a good time.

You can see the story on the Statesman’s website, along with more photos here.

Boise’s SNOW Block Alley, the once dusty, forgotten stretch that Linda Whittig, Devin Koski and their neighbors transformed into a community space, continues to thrive.

Whittig does, too. She recently received a good neighbor award from the city of Boise for her SNOW work. Under Whittig’s guidance, the alley also took on a new role (along with its others: basketball court, movie theater, vegetable garden, etc.) as an elegant space for a special dinner.

In organizing the party, Whittig had models to emulate — a family on Harrison Boulevard that used to set up long white tables on the boulevard’s grassy median for swank dinners on Boise High prom night.

She also looked to Outstanding in the Field, a company that organizes outdoor feasts of local food across the world and an event that took place in Paris in January. Billed as the “poshest flash mob picnic,” diners wore white and descended on the Place Vendome with their gourmet fare.

“It wasn’t necessarily legal. Everyone showed up with their plates and wine. They served everything up, wrapped it up and got out,” said Whittig. “Of course, in our case, we didn’t want everyone to get out.”

And they didn’t. The guests dined well into the evening, even as the evening air got chilly. The menu, said Whittig, included local lamb, sausages and pork, most grilled on-site. 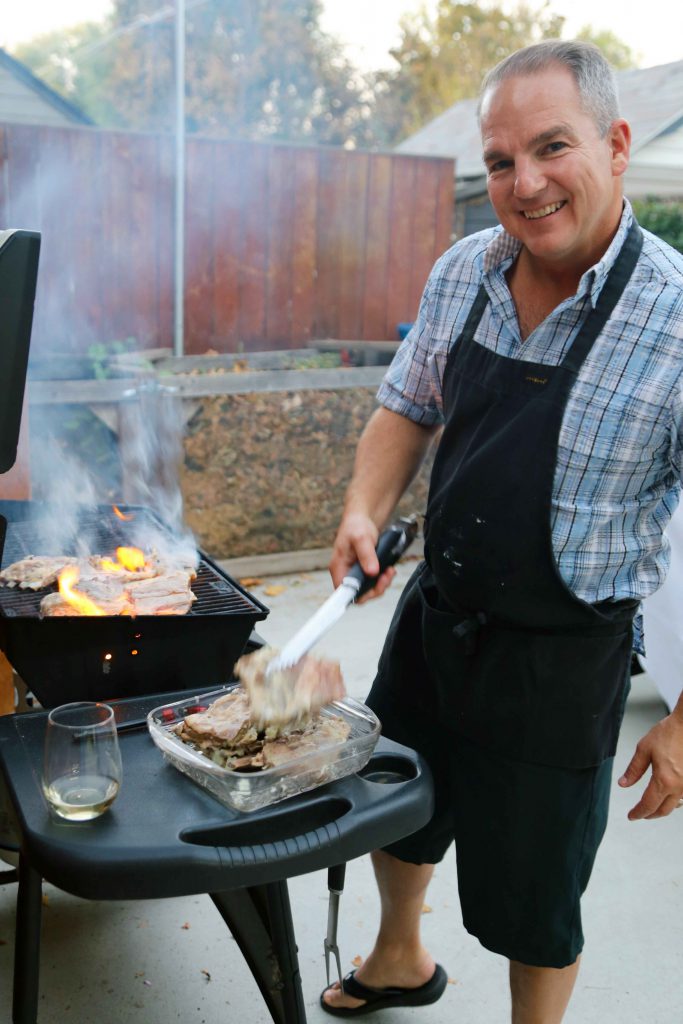 “We brought out a barbecue so ranchers could grill there as different people were showing up, bringing new dishes all the time,” she said. 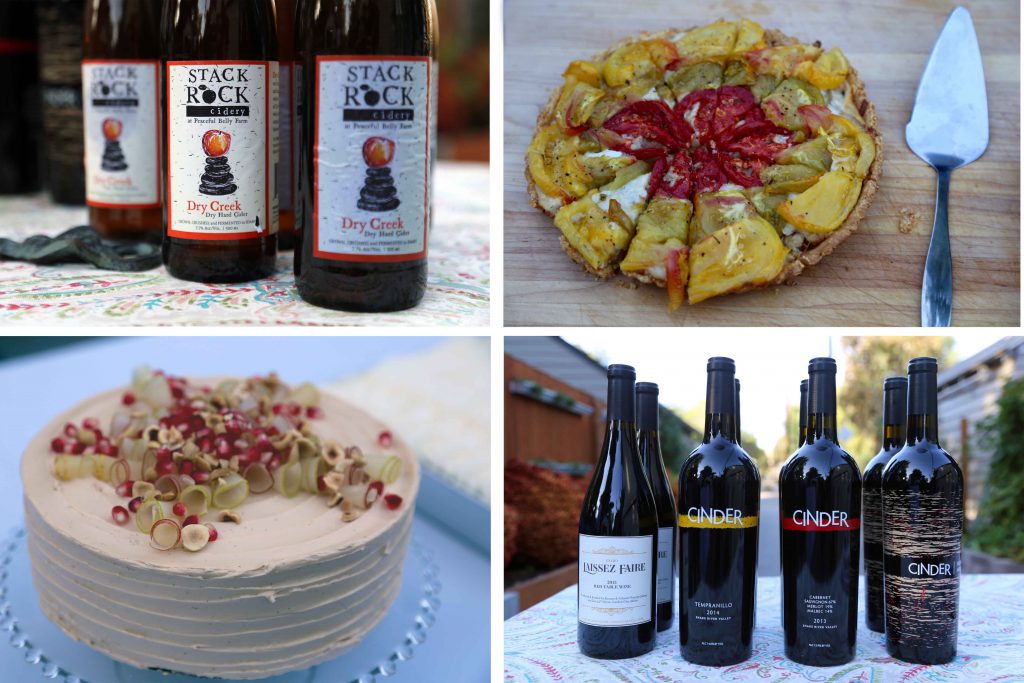 Also on the local drink menu: Snow Block Brew, a hyper local beer made by a SNOW neighbor.

On the dessert menu: a cake from State & Lemp, the upscale eatery on State Street in Boise, but also a cobbler made by SNOW neighbors with peaches from their garden. The event also included a birthday salute to a neighborhood friend.

And to celebrate Idaho’s iconic spud, Whittig made a dressed-up version of pommes Anna, a classic French layered potato dish. Her spin: Using purple potatoes grown by her father on the family farm near Notus, cut with a mandoline and combined with alternating layers of russet and red potatoes for color contrast and, continuing the French theme, plenty of Gruyere cheese.

“We really thought of this as a harvest party to embrace the end of the season and what you grow,” Whittig said. “But we all thought, ‘That was fun. We want to do it again.’”

The changing seasons mean a whole new round of alley festivities. SNOW Block Alley is now preparing for more pumpkin carving, a chili cook-off and, of course, a no-holds-barred Halloween. 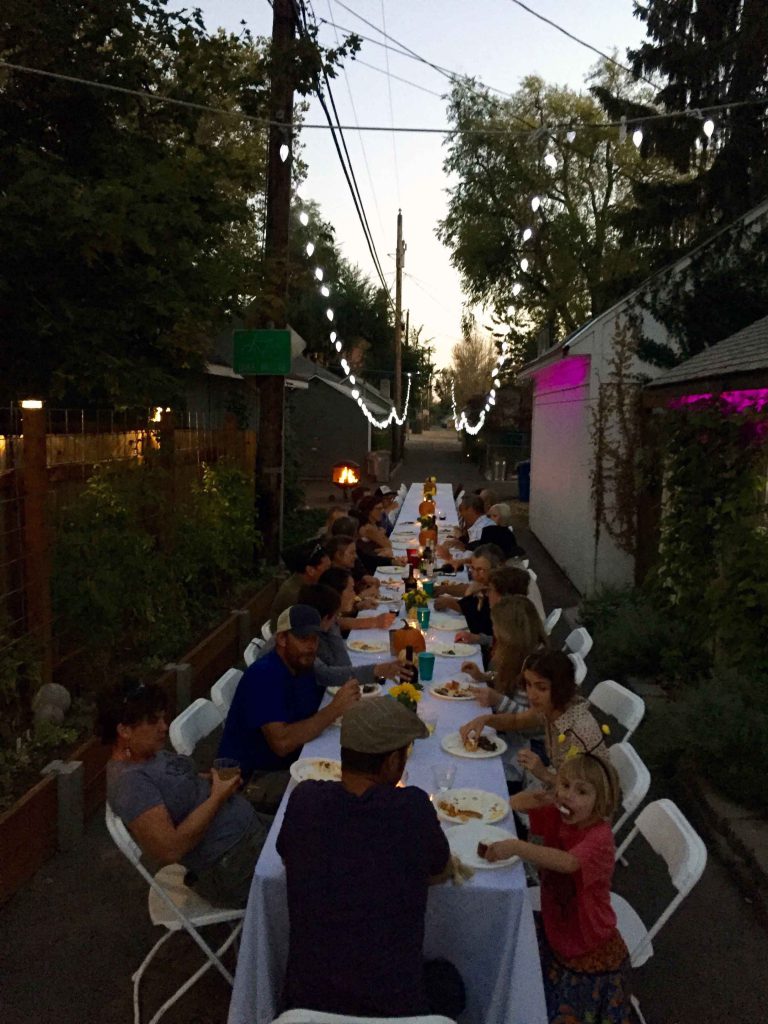 ▪  When you’re planning your food, think about what’s in season. That’s the point of a harvest party. “This is the bounty time of the year,” said Whittig. “Find out what’s coming in from the farms now, celebrating cuisine and the change of season, moving away from light lettuce into butternut squash and root vegetables.”

▪  If your party is outside, make sure your guests have some way to keep warm, whether that’s a fire pit, outdoor heater or even throw blankets. A warm, sunny fall late afternoon chills down fast as soon as the sun sets.

▪  Even if your focus is on wine and beer and other local brews, include some interesting non-alcoholic drinks (besides water) for kids and non-drinkers. Maybe a nice local apple cider. “We had water with lemon and lime slices and mint, but that wasn’t all that exciting,” Whittig said.

▪  Consider how to pace your party and think of how the layout of tables affects it. “I learned this in hindsight,” said Whittig. “We had a table for food. Everyone brought their potluck put their food out at the same time. We had wanted a cocktail hour and appetizers, but with the one table, that didn’t work too well. The meat wasn’t cooked, but people were already eating the side dishes. Once people start eating, they’re eating.”

▪  Lighting is important. No one wants to sit outside in the dark, struggling to see their food.

▪  Outdoor harvest parties, especially neighborhood parties, encourage people to come and go over over the course of a long evening. When you’re planning your food, choose dishes that hold well, not something that’s going to melt, or harden, etc.

▪  Stick with simple decor: “Don’t spend a fortune,” said Whittig. “Get those little pumpkins as table decoration. You can reuse them for Halloween.” The alley’s harvest party decor included pumpkins as well as “funky, knobby gourds” and lots of yellow mums with bluish leaves to round out the harvest palette of greens and oranges. “We kept it restrained. It’s a harvest party. Balloons? No. We said, ‘let’s reel it back in,’” said Whittig.