The winter edition of Edible Idaho came out recently and in it, I dive into the age old debate of stuffing vs dressing and uncover a few interesting facts along the way. 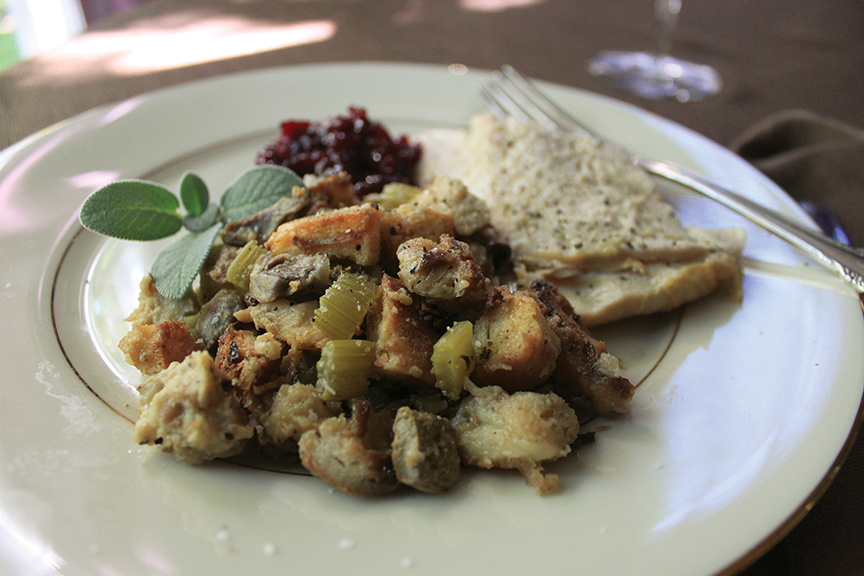 “Dressing is what you put on salads,” was the snarky response I received when I asked friend Ashley Brogdon what she calls turkey’s famous sidekick.

“Cornbread, sausage, herbs. Stuffed in the bird; none of this separate casserole stuff,” she said.

Well, there went my theory. Up to this point, the terminology seemed clear-cut to me. It was a matter of geography: Cooked in- side the bird, it was stuffing. Outside, it’s dressing. But apparently it’s not that logical.

Checking in at History.com, I found it is geographically based, with Southerners calling it dressing, Northerners calling it stuffing and one state, Pennsylvania, using its own unique term: filling. So I did what was necessary: I polled my friends.

There seemed to be some weight to this regional theory, as those representing Florida and Alabama enjoyed dressing but then a friend who grew up in Kentucky threw off the trend by calling it stuffing, which was the much more common response from those from New York to Oregon. Most Westerners seemed to think the terminology was inter- changeable. And finally, the one person I asked from Pennsylvania did indeed respond with filling.

And that actually makes sense, as the idea of filling the cavity of an animal or bird with

something edible began long before the holi- day spread in Plymouth. The French were es- pecially fond of this technique, also known as farce from the verb farcir, meaning “to stuff.” Their fillings were often elaborate forms of meat inside of meat inside of meat—think precursor to the turducken. The term stuffing first appeared in print in 1538 but became too crass for upperclass Victorians so they adopted the kinder, more polite word, dressing.

As for whether there was anything repre- senting this side dish at that first iconic three- day Thanksgiving feast in the fall of 1621 seems mainly speculation. It’s doubtful that turkey was the star. More likely would have been duck, goose or swan and if they were stuffed, onions, nuts and herbs would have been more common than anything bread-based.

The big game changer for this once-a- year-side-dish came in 1972 when General Foods took the holiday tradition and made it into convenience food: Stove Top Stuffing. Suddenly it was easy to have this traditional dish anytime. This also blows my theory that stuffing has to be inside something. Not only was the stovetop version not inside a turkey, there didn’t even need to be a turkey.

The only thing more passionately con- tested than the terminology seems to be what goes in it, but my friends had more of a con- sensus. No matter what part of the country

they were from, they agreed that the recipes should include white bread or croutons, onions, celery and hearty herbs like sage, rose- mary, thyme and marjoram. Common addi- tions included turkey giblets, sausage or bacon, while a few adventurous added apples, mush- rooms or dried cranberries. The only one beat- ing her own culinary drum again was Ashley with her family’s traditional Southern corn- bread recipe.

As for me, the terms have always been in- terchangeable but the recipe is always the same. Each year I thumb through shiny magazine pages full of exotic-sounding options full of oys- ters or roasted chestnuts, well aware that I won’t be making any of them when it comes to that fourth Thursday in November. No—I’ll be making the same menu that I make each year, full of family traditions handed down to me just like the faded and stained recipe cards that hold them, including my mom’s sage dressing.